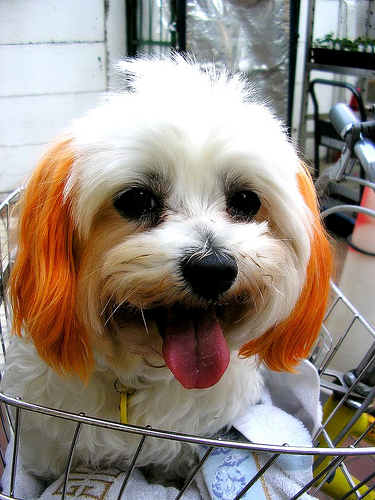 When it comes to hair dyes, they are not meant for animals. Many canine owners think it’s so cute to dye their dog’s hair. You may have even seen pictures on the Internet of dogs with their hair dyed and thought, “how cute”. It’s not cute. In fact, it’s downright harmful to a canine’s health because of the dye’s toxic chemicals.

Emma Watson, the actress who played Hermione Granger in Harry Potter, was seen leaving a salon with Darcy, a one-year-old Maltese terrier believed to be her flatmate’s dog friend. The dog’s fur had been dyed pink. The pictures began a vicious discussion among canine lovers with many of them critical of it.

According to some veterinarians, it doesn’t matter if the dye is safe because it changes how the dog will smell and look to other animals – in fact, affecting how the animals interact with one another.

Why People Dye Their Dogs’ Furs?

You might be asking yourself why anyone would dye their canine friend’s hair.

1 – They’re bored with nothing to do but dyeing their canine’s fur.

2 – They saw a dog that had its hair dyed and thought it would be cool to do too.

3 – Some people love including their pets in celebrations such as Christmas, Halloween, etc.

3 Primary Reasons Not To Dye Your Canine’s Fur

It’s important to understand that while there are several reasons you shouldn’t dye a dog’s hair, there are just really three primary reasons not to do it.

Hair dye is formulated for human hair, not dog hair. There has been no hair dyes made especially for dogs because there have been no actual studies completed on the long-term effects of hair dyes on dogs. People have reported suffering health problems from hair dye, so it’s only natural for one to assume that dogs can have some similar reactions. On top of that, a canine’s skin is extremely delicate and may react negatively to harsh chemicals such hydrogen peroxide and ammonia, which are found in the human hair dyes.

2 – Risks To Their Health

Hair dye on humans is only done to one area of the body. For canines, however, it’s the entire body.  There’s a possibility that the dye gets into their ears, eyes and/or mouth, which is harmful to them.  Also, people using hair dyes have reported suffering with itching, burning and skin irritation.

Imagine you’d feel if all these chemicals were put onto your body. Dogs are like humans in that they can also have allergic reactions to the hair dye. There’s also the possibility that a dog will try and lick his/her coat during the application process. This will lead to ingestion of those chemicals, which is deadly to humans and animals. If a dog consumes any of the hair dye it can cause a number of issues including but not limited to:[list style=”arrow”]

People generally due their hair for cosmetic motives; however, dogs don’t have this concept. They have no knowledge as to why their hair is being done. And, for the most part, they don’t like it due to how unnatural it is. Dogs cannot control what they look like and they have no ability to change how they look themselves.

You should never dye your dog’s hair – regardless of the reason why you want to do it. Physically, they can suffer with vomiting from accidental ingestion, chemical burns and skin irritations. Psychologically, your dog is unable to understand why you are dyeing their fur because it’s an unnatural process to them… beyond their control.

Besides, canines have beautiful coat colors – white, black, tan, auburn, brown, etc. – so you should enjoy their natural colors and beauty.

3 thoughts on “Why You Should Not Dye Your Dog’s Fur?”